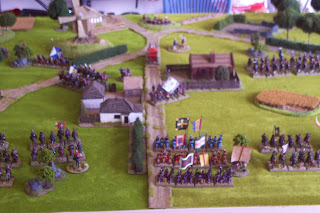 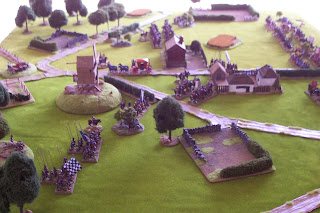 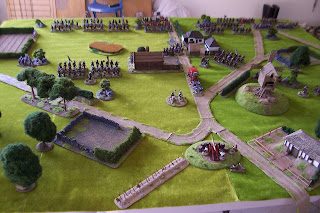 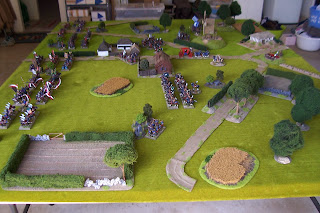 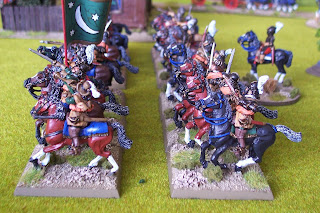 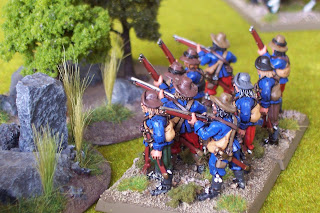 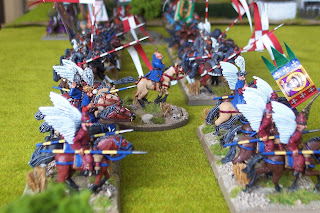 Sorry guys I have been very slack in posting on the site in the 6 weeks, to tell you the truth I have had nothing really interesting to say or show. I have been working on 2 sets of terrain (1 European and 1 desert) so I can actually have a game at my place instead of using the 12 x 6 set ups that Mark and Kevin each have at their place. I have however had the oppurtunity to use 2 really interesting set of rules in the last 6 weeks, the first of these is designed for small to medium sized battles of the ECW. The rules are available from the site of Clarence Harrison of Chesapeake whose website Quindia Studios is a inspiration for painting and terrain building. I sent Clarence an email and he sent me his ECW ruleset in a PDF file for free and I highly recommend it for ECW. The system is card driven and each unit has a card that needs to be drawn before they can move, fire etc. I will be using it for ECW but I feel for the bigger battles of the TYW and Deluge the second set I tried will be the one I am sticking to. Yesterday we tried the newly released 'Beneath the Lilly Banners' and despite them being a new set we quickly got hold of the simple rule mechanics. We played a cut down version of the rearguard scenario from the rulebook (halved everything), the new setting was Lithuania 1658 and saw a small Swedish rearguard take on a very large Muscovite force. We used the rules for the Swedes and Muscovites from the GNW section and additions from the Eastern rules section. The rules are subtle and brutal and I like to see my cavalry melees quickly settles as we tend to play with very large armies and everything else has seemed to bog down in detail, give them a try for the Deluge onward (I think the TYW would be easily handled as well). I leave you with some photos of the game and my new table, it was 7 1/2 feet by 6 feet with my new latex roads; steel wool trees and hedges and hills of foam. Until next time, I promise to write more about the rules with troop classifications and unit organisation for those who may wish to give them a try (all infantry and cavalry bases are 50mm x 50mm which is very close to the stated base sizes). Cheers Scott
P.S If you are in Australia Eureka Miniatures are carrying these for 40 dollars Aus. which is cheaper than buying from the UK (I payed 19.50 Stirling including postage). Cheers
Posted by Scott Robertson at 9:01 am 6 comments: