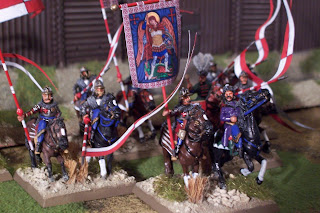 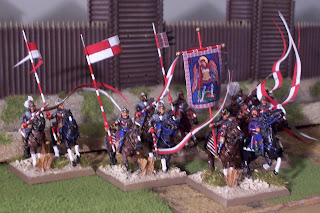 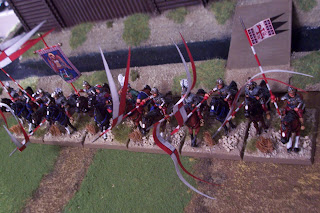 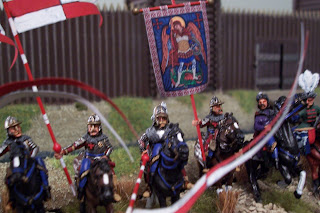 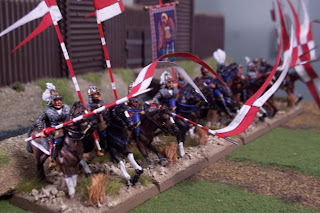 Here are more of the new hussars that I have painted. The figures are the new Polish Winged Hussar figures from Essex Miniatures which have had the wings removed and green stuff added to represent the fur cape worn by the hussars. The figures are on Elite Miniature horses with saddle cloth and saddle added with green stuff and pistol holsters from Redoubt miniatures. The photos are not the best because I took them at night and did not have enough life but I hope you get the idea.


Posted by Scott Robertson at 9:54 pm No comments: 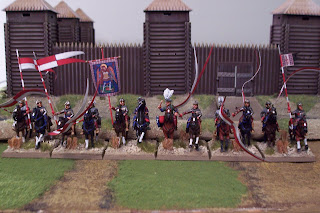 Here are some pictures that I took the other night after I had finally finished painting them. They had been on my painting desk for a few months now and their continued presence had started to irk me so I feel they are not what I was really aiming for but I won't be painting a new lot.

Posted by Scott Robertson at 9:54 pm No comments:

The hussars are based upon the painting and descriptions of the unit from Dan Schoor's fantastic site. The passage below comes from this site and explains the formation of the corps and its tactical uses:
http://www.northernwars.com/RusArm17.html#anchor28800

Besides the Reiters, another type of regular cavalry was the Lancers. Lancers appear by 1662 in the Belgorod Corps (on the southern border of Russia). Two regiments were converted from Reiters to Lancers. These regiments consisted of 5 companies, each of about 100 men. One company in each lancer regiment was Reiter.

In contrast to southern units, in the Novgorod Corps (Northwest) a separate Hussar regiment was formed. It had different history from the lancers. The hussars were formed as a close combat unit in Reiter regiments. Russian hussars were a copy of Polish Hussars, but without "wings" and shields (I'm not sure in it, but I have not found any mention of wings and shields in this regiment). In 1662 a separate Hussar regiment was formed under Colonel Nikifor Karaulov. In consisted of 20 officers and 350 hussars in five companies. In 1673 this regiment numbered 417 men, and 465 men in 1679.

Hussars were armed with a lance (not spear) and pistols. They were protected by a light cuirass and Naruchnik (an armour protecting the hands). In the middle of 1670's Lancer companies were added to Reiters regiments in Novgorod corps too, but a separate Hussar regiment was retained.
Posted by Scott Robertson at 9:54 pm No comments:

These are the single winged and double winged Polish hussar figures from Essex Miniatures that I used to make my Muscovite Hussars. I actually preferred the older model but this is what is available today. I used green stuff to fill the hole in the back of the model and create a fur cape, the head of the single winged hussar was replaced with a suitable one from Redoubt Miniatures (many different variants) and the hands were also replaced with ones from Old Glory which needed to be drilled (so lance would not fall out). Figures were mounted on Elite Miniatures horses with saddle cloth and saddle added with green stuff. I love these horses which are nice and large but Essex produce a very nice one for their Muscovite range which I highly recommend for your own Hussars (I get mine for free from Nathan Vinson who owns Elite Miniatures Australia, thanks mate). Nathan has a totally awesome Blog called "Lonely Gamers" which you can access in the links pages, check it out. Finally those of you who have gone through the totally bizarre process of posting a comment here I say thanks, I have tried everything I can to make it easier to post but it just gets worse whatever I do. Cheers Scott
Posted by Scott Robertson at 9:54 pm No comments:

Hey guys I had forgotten that I have written up a few new army lists for the 1644 rules. The Polish, Cossack and Muscovite lists can be found here :
http://www.esnips.com/web/wab-ramblingssBusinessFiles
I have yet to finish the Ottoman and other lists but this is a start. I really like the rules but there are parts that leave our group just scratching our heads. The owner of the Yahoo Eastern Renaissance discussion group (Pan Mark) has an excellent list of small additions which will help you enjoy the game and rule system even more (I use about half of his suggestions).
Posted by Scott Robertson at 9:54 pm No comments: 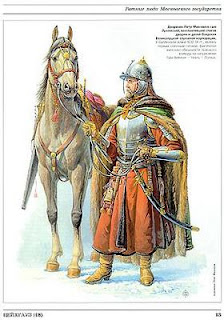 It has been awhile since I last posted on this site, no real reason apart from a slow painting schedule. Thanks to those who have waited because I have some photos of my new Muscovite heavy hussar unit for them to check out. The figures are based upon this recreation from the Russian military history magazine.
Posted by Scott Robertson at 9:54 pm 1 comment: