Thought I might post a quick note before I go away on a much anticipated break about the lists I have posted, as some people have been less than happy how I have rated such and such unit (especially Winged Hussars). These lists and additional rules developed from an interest that my friends and I had in the period and because there wasn't any rules around that we really liked we decided to try WECW as the system (new 1644 rules look interesting). Our group loves the period and I especially love the books of Sienkiewicz and the subsequent movies by Jerzy Hoffman and so from the very start I have wanted some type of character identification within the rules and lists. I decided to structure the rules and lists with this mentality from the start because at the end of the day I wanted to use the figures and terrain we had all spent a lot of money and time creating. It is after all just a game to me and I wanted to have some fun with friends and there is no way in anyones stretch of imagination that WECW could be classified as a historical rule set anyway (if you think so than good luck with that one).

I have had emails from one or two people that have corrected or disagreed with the rating or placement of such and such unit in a certain list (because they have more knowledge than do I or they have read a source in some other language). I have no problem with this because at the very begining I stated that if you disagreed with something than change it, that is why I left everything in Word form anyway, so this could be easily done. I have no connection with Warhammer Historical and have done everything on this site in my own free time and let anyone and everyone have access to the lists and the rules so they can at least start and get gaming with their figures. Finally for those that dislike what I have done then just change them but don't come back and say that they are not completly historic because I have used Sienkiewicz as a influence or have left out such and such unit because the WECW system could never in a month of Sundays ever achieve that (just look at the firing of muskets and cannons as an example or the confused pike rules). These lists are my interpretation and my hard work so if you don't like them change them or do your own work and write up your mega hard and invincible Winged Hussars (but don't expect anyone to game you). I game for fun and the spectacle of well painted figures and terrain on the table and make no claim at being the font of all knowledge on the period. Hopefully that has cleared up my view on the lists etc. so until next time (when I hopefully will have some new Muscovites up for viewing). Cheers Scott
Posted by Scott Robertson at 5:20 pm 1 comment: 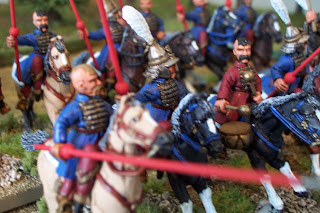 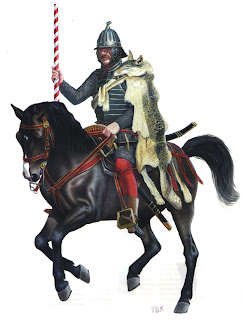 Just discovered a site of some fantastic Croatian Military art at http://pubwww.srce.hr/husar/
I have some of the artist's other works but this site has most of his pieces in one collection and are an inspiration for painting that Transylvanian army that I wrote the lists for and have yet to play myself. The heavy Hussar (1600) pictured above is interesting and is very easy to model with existing 25-28mm figure ranges. The figure has many similarities to the Polish and Muscovite Hussars of the same period and just shows how many of the military techniques and ideas were shared by those living close to each other. There are several other images of heavy hussars from around the 1650's which are very similar apart from the boots and some more plate, so I feel a mix of old and new style figures would look great and not be too out of place?
To start with Old Glory has a specific pack in their Eastern Renaissance range which is well detailed but way too small for my liking, then their are the unarmoured Hussars models from Redoubt miniatures which look great and are large (28mm), see my attempt above (painted as Lithuanians). The new Polish Hussars from TAG would also fit the bill and you could use the wing to represent Tartar nobles as pictured trying to captrue Karl X by several contemporary artists. However I am going to use a combination of the new Essex Miniature Polish Hussars without wings to make this unit. They are being painted at the moment as Muscovite heavy hussars but the addition of a seperate flag will enable them to fight in the 1656 Transylvanian invasion of Poland with their Swedish and Cossack allies.
Posted by Scott Robertson at 6:19 pm 1 comment: 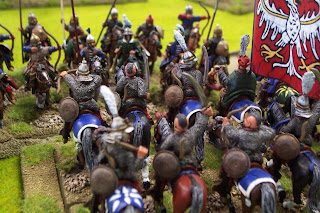 Finally got my Broadband connection so I can actually post more photos and not have to wait for ages to do so anymore. I have been reading the Generals Compendium published by GW USA (2003)and even though it is designed for Warhammer Fantasy the book has some great ideas for campaigns, terrain building, sieges, scenarios and ship combat rules that are easily adapted to WECW and WAB. There is one scenario that is easily adapted to the Deluge period and that is the raid scenario (pp. 166-7).
Raid 1656
Objectives
The attacking players objective is to loot and then burn as many structures as possible and also slay as many defenders as is possible.
The defender has to try and stop the looting and destruction of his buildings and kill as many attackers as is possible.
The Battlefield
The most important features on the battlefield are the 6 structures. These can be houses in a small village a church or a windmill for grinding grain (whatever you have but please ensure they fit into a Eastern context). These buildings each contain 1 loot point and should be spread across the table outside each sides deployment zone (centre of the table looks and feels right).
The Forces
Both sides choose from the respective lists to an agreed points value. The defender has only 75% of the attackers points. For instance 1500 points of defenders against 2000 points of attackers.
To give a period feel of this type of raid which was common throughout the Deluge, each army are only allowed to take cavalry and dragoon units (dragoons may start dismounted).
Deployment
The defender sets up his entire army in his normal deployment zone (as per rules) and then the attacker sets up in his normal deployment zone.
1st Turn
The attacker moves his army first.
Special Rules
The structures are classed as timber, brick or log buildings and therefore have T7 and 5 damage points. Attacking units have to spend 1 turn near a building to loot it and all attacking units are equipped with torches and will take one turn of base to base contact to ensure that the building is on fire.
Scenario Length
The scenario will last a minimum of 6 turns or until agreed.
Who has won
The players receive 1 point for each loot point have taken or saved and 1 point for each building they have destroyed or saved (attacker and defender).
I will play this game ASAP and publish an illustrated report here. The game will see an attacking force of Cossacks and Muscovites raiding the fringes of the Lithuanian Duchy in 1656 (Lithuanian rebels and Swedes).

Posted by Scott Robertson at 6:19 pm No comments:

Where have you been? 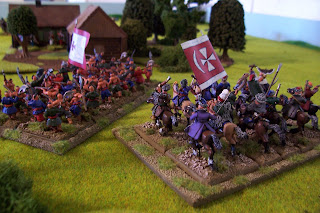 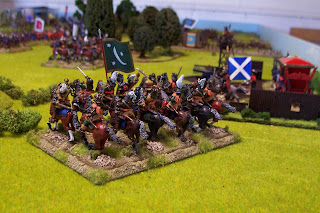 Sorry to have made everyone wait so long for this post (5 weeks) but I had thought that when I signed up for Optus broadband I would only have to wait the maximum 10 days and not over 4 weeks. The modem only arrived yesterday and I have yet to pick it up, so I this post is still the so slowwwww dial up (which means only a few photos).
I have been a little busy with games over the last few weeks and have been able to play both WECW and WAB. Last week I actually got to use some figures that haven't seen the wargaming table for around 4-5 years. We played a nice and relaxed game of WAB at Mark's place using the the final (I hope) draft of Jeff Jonas' Successor supplement. The game was set circa 260 BC and saw a large force of Seleucid troops launch a suprise attack against a Ptolemaic force and their newly established camp. In total there was 10 large phalanxes of Pikemen and mercenary hoplites as well as 7 elephants, 100 plus light infantry and around 140 cavalry. Good fun was had by all and it was the first game that Kevin's young son James (15) actually went on the offensive (some advice added from myself and Kevin of course). To be honest Mark and Jeff had a difficult task but their lack of knowledge of the WAB rules probably aided their downfail (don't care still beat you Mark).
To finish of until I get my modem and broadband hooked up here are a couple of pictures from a game that saw 2000 points of my Cossacks ally with 2000 points of Swedish mercenaries against a 4000 point force of Austrians and Brandenburgers. The battle was a difficullt one with the terrain breaking up any combined attack by both sides but James' lack of aggression allowed Kenny and I to create a massive hole in one wing of the combined army (that's why Kevin and I pushed James so hard in the next game). Until next time.

Posted by Scott Robertson at 6:19 pm No comments: