Posted by Scott Robertson at 7:37 pm No comments: 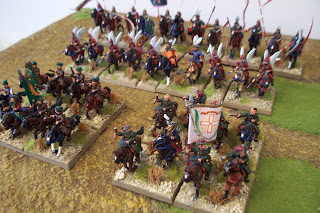 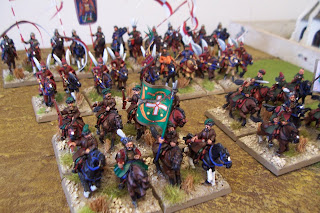 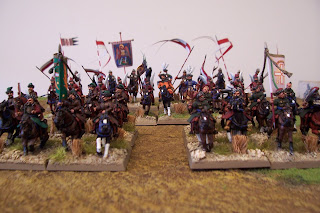 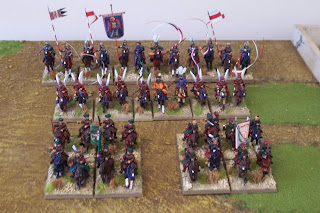 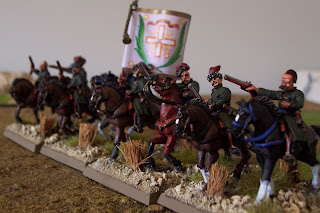 New unit of Muscovite Reiters in green with the rest of the new regiments I have painted so far. I still have 3 more units of reiters to do and then the Muscovite cavalry are done, remember to have a look at the 5 units of 12 Muscovite Boyar cavalry that I have already done. The unit in green was finished nearly 3 weeks ago but as I had just bought a new house I had to move everything etc. and have had little time for anything else. Those people out there who have spotted the later GNW style flag I apologise but as there is little available information in English I wanted to make them usable for both periods (early GNW). I didn't feel like handpainting the flags from Dan Schoor's excellent site but I might do later after I have had a few games (keep those people happy). For those with more information on Muscovite uniforms, flags and organisation during the Deluge period I say "please share it". There is nothing more frustrating then getting corrected on uniform points etc. (best guess many times) when nothing else is offered up. I read Swedish and some German but no Polish or Russian so would really appreciate some information from those better informed, please. Anyway for those after the 1644 Muscovite army lists I will post them and the Ottoman list some time in the near future, somehow they got left off the last last but there is nothing stopping people from creating their own using my WECW or own research. Until next time when I will talk about how the free ruleset "Father Tilly 3" plays (I am rather excited by these and have been reading them carefully). Cheers Scott 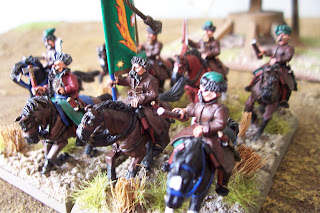 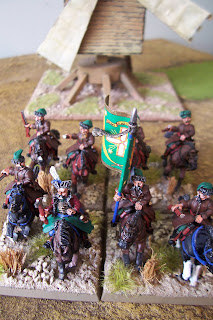 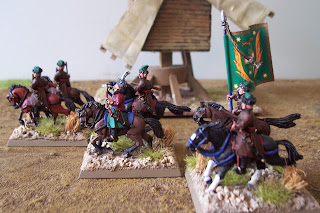 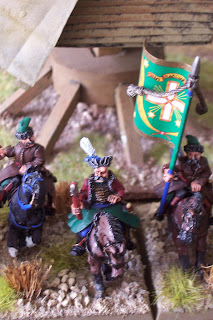 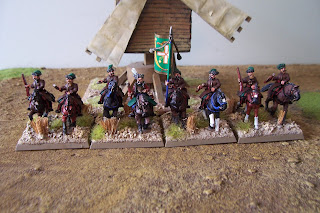 I finally finished the first of my five Reiter units for my Muscovite armies. The uniform style and equipment are based upon the painting from the Russian historical magazine Zeughus and the Osprey book on the cavalry of Peter of Great. See older posts for the illustration of the Reiter in green. I have used Old Glory Cossack miniatures to represent the units, the figures are great and have seperate hands with pistols, swords, carbines and lance. I intend to paint the units in Brown, Green, Blue, Grey and Dark Red.

Posted by Scott Robertson at 9:30 am No comments: