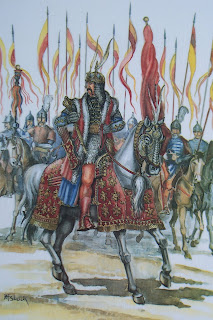 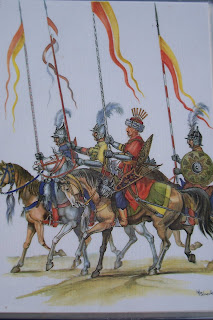 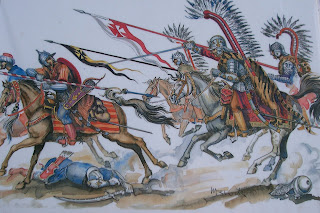 Posted by Scott Robertson at 10:09 pm No comments: 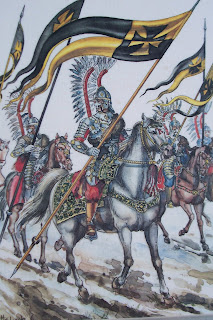 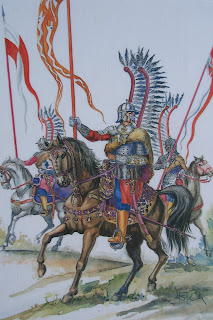 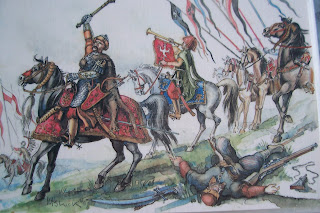 These are a series of Polish and Ottoman watercolours that I bought over 20 years ago and started my interest in the Polish Lithuanian Commonwealth. The watercolours are still available by on the internet from a site in Germany, if anyone is interested I will post their site (they are well woth the money).
Posted by Scott Robertson at 7:06 pm 2 comments: 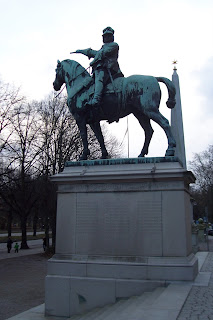 Had a 5500 a side game on Friday, my Cossacks versus Michael and Robert using Bob's Ottomans. Apart from the game I was interested in how the lists and new/additional rules played, especially as Michael always seems to have a very good perspective on rule systems (methodical). I won't say much about the game except it was very close and my Cossack's went down to the Ottoman assualt, losing the army commander and standard bearer as well as numerous other units (all my best ones). Bob was pretty excited as it was his first victory over me in any system since 2002, I blame my damned Brotherhood unit who went chasing after a fleeing unit and then were smashed by 3 Ottoman cavalry units, live and learn I should have taken more infantry. Anyway the rule corrections/additions that came out of the game for us were the following:
1. Toughness, I have always hated how veteran units are a toughness of 4, it changes the of the whole feel and fairness of the game. We agreed that the only unts to have a toughness of 4 will be Elites, rare and expensive (Winged Hussars etc.).
2. Rash, this rule is a bit harsh as units have to charge any unit be it foot ot horse in charge range, we changed this to a D6 roll, a 1-2 means they have to advance (instead of a D6 roll of 1) and if any enemy are in charge range they have to charge on this roll (a 33% chance of charging off out of complete control instead of the 100% chance previuosly).
3. Artillery, need to be able to cause some damage to buildings, earthworks and tabors. We have never been able to find how many wounds a cannon makes so our group decided to use the following template; a light gun will cause D3 wounds, a medium gun will cause D3 plus 1 and a heavy gun will cause D3 plus 2. Now a gun especially a heavy piece has the potential to destroy a wagon in a tabor with one hit.
I gave the others the new army lists to peruse and provide suggestions but the initial opinions seem to be very positive. I will post these if there is any interest, as I have been away there doesn't seem to be much action on the site, so if you want them posted leave a comment or email me. So far there are a total of 15 lists that will enable players to fight armies from 1623 up until 1673; they are 5 Polish, 1 Cossack, 2 Swedish, 1 Brandenburg, 2 Austrian, 1 Danish, 1 Transylvanian, 1 Muscovite and 1 Ottoman. Each of the lists has varients built into it, such as different allies etc. for different periods. It is now much easier for a novice to actually pick an army, one that seems to be historical (seems as many of us have different views upon what is right etc.).
Any way guys I leave you with a picture of a fantastic and very large statue of Karl X that stands on the street about 150 metres from the entrance to the Wasa museum in Stockholm. The staue has many of the major battles inscribed on the base and I was a very happy chap when I finally found it. Cheers Scott

Posted by Scott Robertson at 9:40 am 4 comments:

Thought I might post a bit of a taster from one of the Polish lists to show how I am approaching the revised book.

Special Rules: Noble commanders must lead units of Winged Hussars and Pancerni if no characters are present in the unit. Noble Commanders cost (16 pts); see ‘Armies of Chivalry’ (p. 44), they are not considered to be characters for unit selection purposes. Noble commander has two attacks and can issue or accept challenges from characters.

Reliable Allies: If reliable allies are chosen, there must be at least one allied character to lead these contingents, they can use the army general and battle standard bonus.

Reluctant Allies: If reluctant allies are chosen, there must be at least one allied character to lead these contingents, they cannot use the army general and battle standard bonus.

Mercenaries: Mercenaries get no benefit from the general’s leadership or the battle standard bonus.
Posted by Scott Robertson at 11:07 pm No comments:

The Army of Karl XII 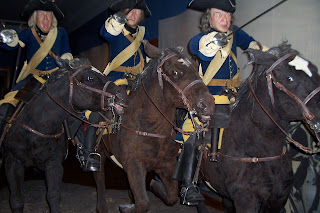 Fantastic trio of Swedish cavalary from the period of Karl XII at the Swedish Armee Museum at Stockholm. Notice the small size of the horses and just how close they are to each other to help with the delivery of the famous Swedish cavalry charge. I plan to do the Great Northern War later this year when I get through this pile of lead for the Deluge period. Musketeer Miniatures are bringing out some fantastic figures for the period and these combined with the great War of the Spanish Succession range from Front Rank will fulfill all my needs, except for Ottomans and Poles of course.
Posted by Scott Robertson at 11:07 pm No comments: 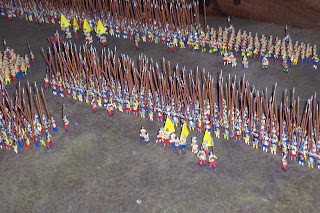 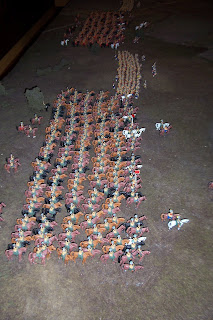 Hey guys thought I might post a couple of reasonable pictures of the fantastic 30mm TYW diorama from the Swedish Armee museum in Stockholm. The figures used are from the old Tradition range, which still look good and of course they are also a Swedish company. The diorama has 5800 painted figures, including cavalry, infantry and artillery, what a great wargaming army that would make! The first picture shows part of the right flank of cavalry, the diorama is in two parts and stretches around 12-14 feet in length. The second pictures shows a close up of one of the infantry regiments on the left flank, picture is not that great but you get the feel of how many miniat
ures there are on the board.
Posted by Scott Robertson at 5:45 pm No comments: 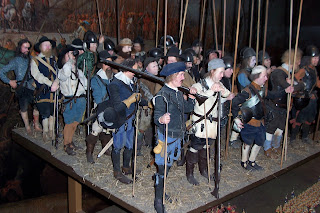 Hey guys, it has been nearly 2 months since I last posted on the site. We finally got back from our 7 week trip, we both had a ball and enjoyed many highlights. The highlights for me regards gaming and history have to be the Pergamon museum in Berlin and the great Swedish Armee Museum in Stockholm. I got lots of good stuff for the period of Karl X from my trip to Stockholm; books, photos and information on flags captured in Poland during 1655/60. I have been busy looking over the army lists as well in the last 2 days and I have attempted to come up with a better model for choosing an army. Maximillian in Germany has come up with some very good id 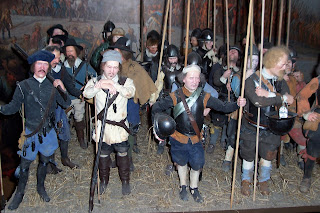 eas which I have attempted to include, such as different rules for Mercenaries, Reliable and reluctant allies etc. So far I have 5 different Polish lists; 1623-47, 1648-54, 1655-60, Rebels 1656-57 and 1661-73, I think this way the different armies can be presented in a way that reflects what was actually present. I will need help to play test these lists, so if you are interested and have access to armies drop me a line. To finish today I post 2 pictures of a Swedish pike formation from the TYW period at the Swedish Armee museum (scale is 1\5th).
Posted by Scott Robertson at 4:10 pm 1 comment: