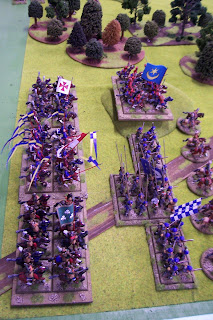 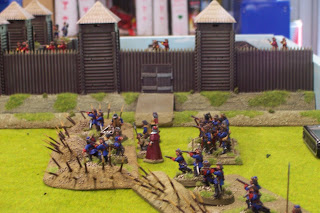 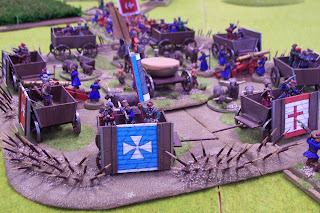 Here are just a few more images of the game we played on Saturday. The top left one shows just one of the very strong Polish columns. Each column had five cavalry regiments of 12 and a 40 man mercenary pike and musket unit. The fort held 30 dismounted dragoons, a 12 man heavy cavalry unit and 2 very lucky mortars. If you hadn't guessed, I went down in a screaming heap with my 4 newly painted Muscovite units being utterly destroyed (I put it down to not having any flags on these units as I am awaiting their arrival).
Posted by Scott Robertson at 7:43 pm No comments:

Cossacks and Muscovites versus Poles game 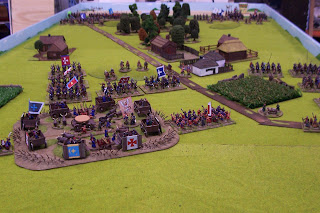 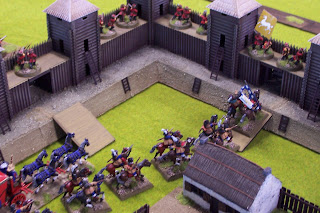 Had my first game in over a month on Saturday. We played a relief game where two columns of Poles had to advance and relieve a fort that was being besieged by a large Cossack and Muscovite force (circa 1656). I played the Cossacks and Muscovites whilst Kevin and his son James (15) led each of the Polish columns, Kevin's brother was in charge of the small force holding the fort but they did have 2 mortars that did soooooo much damage to my forces.
The fort is a heavily modified 20mm plastic kit from the Russian company Zvelda (something like that). I placed the fort on a MDF base and built up the earth parapets with foam. The walls were widened with scribed balsa so that 40mm bases can be placed on them. The fort cost 30 dollars Australian when I bought it about 18 months ago but since then I have seen them for a lot more, which is a great pity as I want 1 more to make it large enough for a great siege game.
The picture on the left shows the view from the fort as the 2 columns advance but are seperated by an impassable section of forest. The table is 12x6 feet and if you look closely you can see that Kevin has added a small section around the edge which he has painted to look like hills, forests and the sky, which is pretty cool and it means that your figures will never get knocked off the table.
Posted by Scott Robertson at 9:44 am No comments: 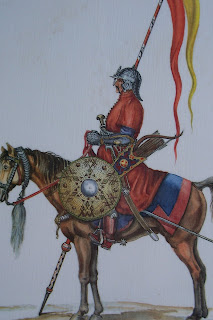 Haven't posted in nearly a week, I was hoping to review the two cavalry unit packs that I ordered from TAG nearly a month ago. I know the UK is on the other side of the world but other figure and book companies always seem to get my order to me very quickly and Caliver Books even has postage free on miniatures over 16 pounds. I won't email TAG yet as I know they have my order but it is annoying and I do plan to spend around 400 pounds or even more with them this year if they can ever get their site fixed. Anyway, better news is that Essex Miniatures have redesigned their Polish and Cossack range over the last year and I have sent for some samples which I will post here when I receive them. I have ordered a load of Hussars (with single and double wings), dragoons, rajtars and personalities from the Polish range and characters and Jiltsi lancers from the Cossack range as well as some Tartars. The Jiltsi lancers should have been in the Muscovite range as they were an elite formation using gilded dragon lances and swan wings, I hope they are modelled like that. I have spent a little bit more than normal these last weeks after getting a full time position yet I am still waiting for everything which is a little frustrating, flags from Caliver (LBM Studios), flags from Vaubeneer (just ordered these though), figures from TAG and Essex Miniatures. Hope these all arrive very soon, as 4 units of Muscovite cavalry need some standards for the game on Saturday where I get to use my fort for the first time. Picture is a Turkish Spahi waiting to charge those infidel Poles. Cheers Scott
Posted by Scott Robertson at 5:12 pm No comments: 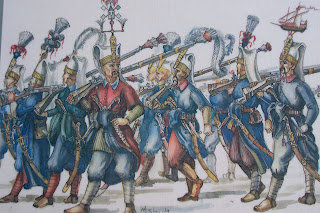 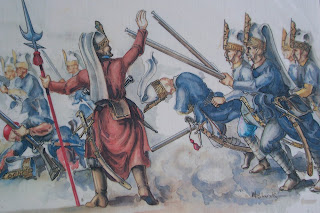 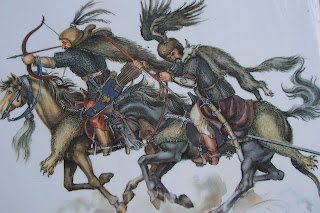 Here are some more of the fantastic water colours from Germany, Delis and some great looking Jannissaries. I have been slow during the last few weeks in putting up new pictures of painted stuff but please stay with me as I have just started my brand new career as a high school teacher and have found it takes up more time than everyone thinks (but looking forward to those long holidays). I have however finished the last of 4x12 man Muscovite cavalry regiments and I will post photos when I recieve the flags from Caliver Books (LBM Studios). I have used the Byzantine flags because after seeing many of the Muscovite/Russian flags at the Swedish Army museum I feel that they are very close and ideal for the Noble levy regiments of cavalry. I have 2x12 Old Glory cavalry regiments on the table and I am also waiting for TAG to release their large Muscovite range which has been waiting for moulding/release for over a year (will buy 2x12 man cavalry units). Talking about TAG, I ordered 2x12 man cavalry unit packs about 3 weeks ago and have yet to recieve them, from talk on the TMP site this seems to be the norm. They are postage free worldwide and I will only start to panic after another week of waiting. They are updating their site once again (third time in the last few years), and promise to have all the many problems sorted out. I for one plan to be ordering lots of unit packs this year, so I hope the site update is a great improvement. Finally Maximillian from Germany has come up with the idea and example of a specific mercenary list that most of the armies can access. This is a great idea, much like the one in Shieldwall and when I have time I will tweek these a little more, which will also help make the lists more managable. I think in the next month I will post everything that I have done so far without pictures so that it is easier to download. To finish for those that are interested in the period I recommend joining the American Renaissance society run by Rich Knapton(Yahoo site as well). Richard produces a great magazine roughly 4 times a year, the last one concentrates upon the Polish Lithuanian Commonwealth (some stuff there by yours truly). Cheers Scott
Posted by Scott Robertson at 8:19 pm No comments: