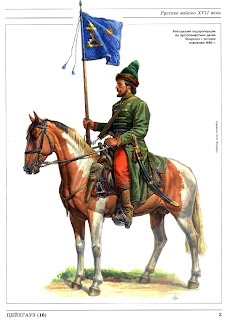 Haven't posted in nearly two weeks so I thought I might just talk about what I have to do to complete my Muscovite army for WECW and Picquet 'Anchor of Faith'. On the painting table are a unit of 10 Essex Jiltsi lancers which are very nice figures and will look great on the table (nearly finished these). I willl then start on 3x20 man of Streltsi in yellow, orange and light blue and then 3x40 man new soldier regiments (one unit done already in blue). The new soldier regiments were modelled on the Western style but soldiers wore Muscovite costume, so musket and pike regiments in differing kaftan colours (should look great). I have just ordered another 30 Cossack cavalry who will be converted into the new regiments of Muscovite cavalry, the picture shows how these looked. The picture comes from a Russian magazine (Zeughus?) and I would like to thank a much better informed and friendly enthusiast for supplying this. When the Old Glory figures arrive I will add pistol holsters from Redoubt miniatures and ensure that they have headgear that is more appropriate for Muscovite soldiers. There will be 4x8 man units (2 figures added from the Essex Ottoman range), and will be classed as gallopers in WECW (mostly raw and average) but they will only fight in single line (no rank bonus). After I paint the cavalry I will add one German mercenary unit of cavalry of 10 men (Essex Miniatures Polish Rajtars and Arqubeusiers with Redoubt head swops), and that will be all I need to paint. I have enough Cossacks (foot and cavalry) that can used in the army and also Tartar light cavalry but I need to finish two more guns and crew. That will be the army and then onto completing my Poles, Swedes and starting my Ottomans.
I have been busy using the credit card in the last two weeks (don't tell Ingrid) and suprise, suprise everything has arrived on time. I recieved the second and fantastic volume on the GNW from Dan Schorr in the US (Acedia press book on Russians, Saxons, Danes and Prussians), lots of great detail on flags, uniforms and unit organisation. Russian flag details will be used on some of my Muscovite units. I also recieved another two cavalry unit builder packs from TAG (11 days to Australia), I got another unit of Polish Pancerni (2 TAG units now) and a unit of Ottoman Dellis as well as a Jannisary cooking pot and a nice little free Ottoman Jannissary commander. What can I say guys, these are just wonderfull figures that are very good value in unit packs especially with free postage to Australia (order before the offer stops). I also recieved the first of three books that I ordered from Sweden on Karl X, this book on Carlbom is 97 years old and has soooo much detail on the Swedish and Finnish regiments in Karl's army but more interesting I finally have information about the foreign infantry and cavalry regiments (German, English etc). Great buy and I would like to thank Dan for really recommending this great book (probably take the rest of the year to read but so what). Any way waiting for the other two books with extreme enthusiasm. I also ordered 7 packs of Old Glory from the US using my Old Glory Army discount (40% off), even with postage they only cost me 30 dollars Australian each. I ordered 3 packs of Cossacks (as Muscovites), 2 packs of Polish mounted Dragoons (with 4 Essex figures to make 3x8 man units), 1 pack of Polish Haiduks and 1 of Muscovite pike. Lots of painting to come, I think that this year is still to be devoted to the wars of Karl X and next year has to be the GNW. Till next time.
Posted by Scott Robertson at 10:37 am No comments: 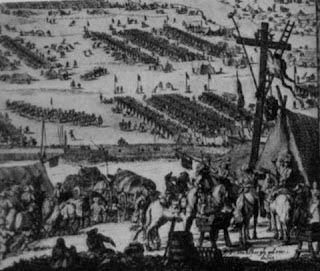 I have been searching for a set of rules to play the bigger Deluge games that our collections seem to push us towards. I and the play testers have put loads of thought and work into making our Eastern adaptions to WECW, and they work pretty well up to a point. I have found that over 6000 points the games become clumsy and very longwinded. There is no real command and control and the bigger games just don't seem to come together. I know this is a problem with several of the others ,so I have been searching for that other mythical rule set that may solve our problems with the larger games and I think I have found something we can use, "Piquet and the Anchor of Faith" supplement . Now I am not saying that these rules are for everyone but they seem to hit the nail on the head for me and I really like how they have based and created units. I have yet to play them but having just also purchased the FOB (Field of Battle) set I think I am into a Piquet frame of mind. I will keep you posted on these when I get time to sit down with someone and play a small game.
I leave you with a picture of a Swedish camp sometime during the period of Karl X (lots of modelling inspiration here).
Posted by Scott Robertson at 4:04 pm No comments:

The last week and half has been a good one for me with all of my overseas orders coming one after the other. I finally recieved the two unit packs from TAG after nearly 5 weeks. I had ordered them nearly a month before but I became worried as I had not recieved them, I then emailed Pete who said that that was way too long and he quickly resent the package no questions asked. So great service from TAG and I have already ordered another two cavalry unitg packs. The figures are fantastic and the detail on the Ottoman Spahis makes me want to start painting my Ottomans straight away. They have finally redone thier website and it is great and easy to use, see it at http://www.theassaultgroup.co.uk/
I also recieved a package from Essex Miniatures with some of their redesigned Poles and Cossacks. The Hussars are nice but not that exciting, I got enough to do two units of 8 figures, one with two wings and the other with one. The very exciting thing for me was the Jiltsi lancers that are for some reason listed in the Cossack range. These lancers were an elite unit in the Muscovite army and are a painters dream. They are in a deep red kaftan edged in gold with two white swan wings attached to their back and carrying blue and yellow lance (which should have a small dragon on the end of it). The photos above show the Essex figure on an Old Glory horse with Redoubt pistol holsters.
I also recieved the flags from LBM studios, which are fantastic and I have managed to track down an Australian distributor who sells these for a very decent price. The distributor is in Melbourne and his name is Michael Cope, if anyone is interested I can probably put his email here if he doesn't object? I also recieved some Swedish and Russian flags from Vaubner studios in Canada, these are for my next planned project the GNW but I can use some of them for the Deluge period at a pinch.
Posted by Scott Robertson at 3:41 pm 2 comments:

The Muscovite cavalry brigade in all its force, 5 units of 12 cavalry ready to invade the Polish/Lithuanian Commonwealth or take on the Swedes.
Posted by Scott Robertson at 3:04 pm No comments:

Here is a 12 man Muscovite cavalry unit that I have just finished. The figures are mostly Old Glory except for 2 Essex miniatures figures, they are mounted on plastic GW horses that I had in the spare box. The flag is from the Byzantine sheet by LBM studios and are fantastic if a little fiddly to fit.
Posted by Scott Robertson at 2:11 pm No comments:

Muscovite cavalry from the Essex Muscovite and Ottoman range (Boyar with head swap). The horses are all 1st Corps, whilst they can seem small they portray realistically the smaller breeds prevelant in the East (my story and I'm sticking to it). The flag is once again LBM with excellent tassels from Front Rank Miniatures with pistols and holsters from Redoubt.
Posted by Scott Robertson at 2:11 pm No comments:

Three views of the 3 remaining Essex Muscovite units, I only have to paint one more Old Glory unit and the Muscovite noble cavalry are done. I have just undercoated a Jiltsi unit and will be painting them very soon. Looks like I have will finally get to use my Muscovite army in a game, perhaps against Robert's Ottomans or Russ' Swedes?
Posted by Scott Robertson at 2:11 pm No comments: