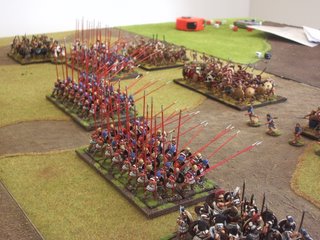 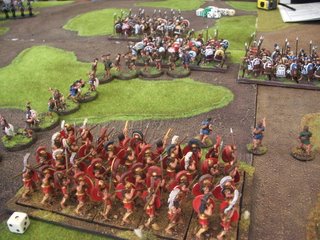 Two more nice views of Macedonian and Spartan phalanxes eying each other before engaging in combat. I will post more of these great shots of Nathan and Eddy's game later this week as well as a nice Macedonian versus Republican Roman game.
Posted by Scott Robertson at 6:57 pm No comments: 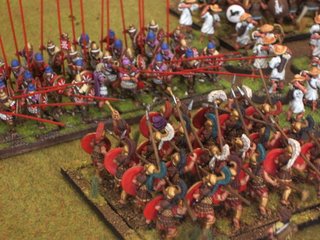 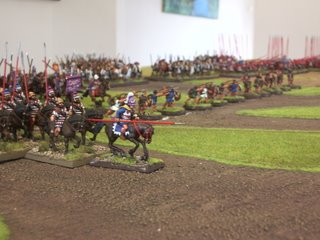 Spartan Phalanx about to come to grips with a large Macedonian Phalanx. The Spartans are 1st Corps miniatures and I really like the way that Eddie has painted the inside of the Hoplite shileds in a nice red, surviving fabric from inside shields found by archeologists support the use of this vibrant colour. The Macedonian cavalry are Tin Soldier figures and are led by a Foundry officer.

Posted by Scott Robertson at 6:57 pm No comments: 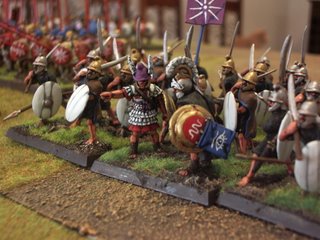 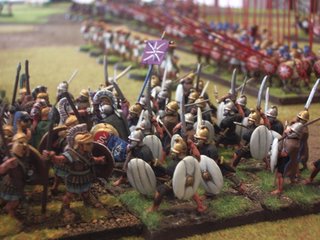 Two close up views of Gerry Webb designed Thracians fighting Black Tree Design mercenary Hoplites. Gerry is thinking of expanding the Thracian range and with the upcoming Successor WAB supplement this would be a very welcome addition. Early Thracian figures abound but there is a real need for Hellenistic period Thracians such as those displayed in the tombs recently discovered in the old Thracian areas. See Slingshot a few years ago for Duncan Head's nice and informative article on one of the latest tombs.
Posted by Scott Robertson at 6:57 pm No comments: 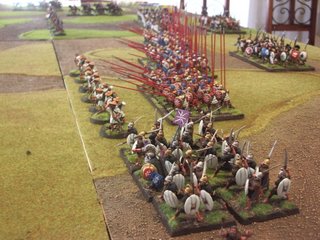 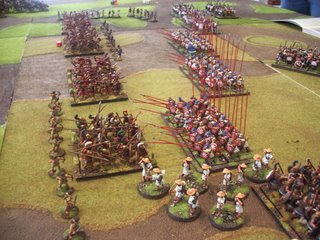 This Spartan versus Macedonian game was played by my good friend Nathan Vinson of Elite Miniatures Australia http://www.eliteminiaturesaustralia.com.au/ and his army collegue Eddie who bith had a great game using the test WAB Successor Supplement a few weeks ago. The Spartan army is made up of 1st Corps Miniatures and Black Tree designs, which both paint up very nicely. The Macedonians are A&A Miniatures and 1st Corps with a unit of Tin Soldier heavy cavalry and nice Thracians by Gerry Webb at Castaway Arts.
Posted by Scott Robertson at 6:57 pm No comments: 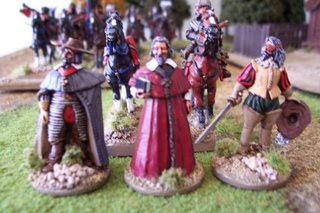 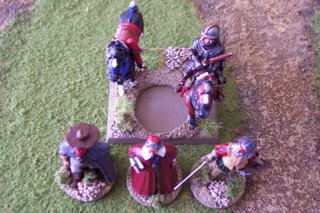 I haven't posted for awhile, I have loads of stuff waiting to be photgraphed but haven't had the time, will get there in the next few weeks. I am in the process of reformating the lists and the rules and I have made a few changes to enable them to play smoothly, so I hope to have these posted in a few months. Some of the rule changes includes dropping the -1 for fighting against light lance and my gaming partner Russel has come up with some great ideas to help sort out some of the grey areas in the pike and shot formations. The two photos above are of some really nice models from Redoubt miniatures that I use in my cavalry regiments as characters, especially religous leaders (I love the Bishop in cuirrassier armour). The Deluge period would not be complete without religon, Islamic Ottomans, Orthodox Cossacks and Muscovites, Protestant Swedes and Prussians and Catholic Poles. I have used the rules from the El Cid WAB supplement and adapted them to give a period feel. Until next time, Cheers Scott
Posted by Scott Robertson at 8:21 pm No comments: 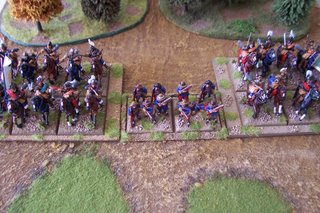 Two Swedish cavalry regiments and attached musketeers. By the time of the Polish invasion of 1655 Swedish forces seem to have started to phase this out, or had its use already disappeared by the end of TYW? Many of the battles of Karl X in Poland and Denmark saw the use of cavalry outnumbering infantry 3-1, probably due the distance covered and the quick movement of the Swedish King.
Posted by Scott Robertson at 9:21 pm No comments: 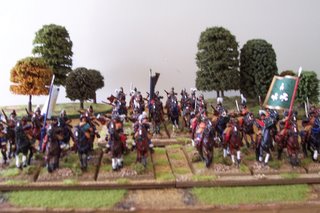 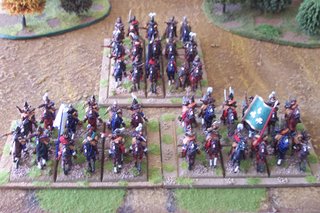 Swedish Cavalry brigade deployed for action, I have 1 more identical brigade to paint and another Brigade which includes 2 Finnish cavalry regiments (Renegade Miniatures).
Posted by Scott Robertson at 9:01 pm No comments:

More shots of the 1st unit of Cuirassiers 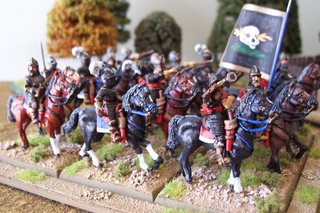 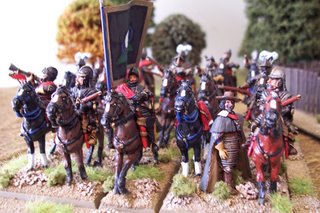 Once again I have used a flag from the TYW which will be changed hopefully in the new year after the trip to Stockholm. I love the Swedish Armeemusuem in Stockholm becuase it really concentrates on my favourite military characters, Karl Gustav, Karl X and XII (will finally visit their burial places this time). The museum actually has a huge diorama of several thousand 30mm Tradition figures from the TYW, would be great as a wargaming army.
Posted by Scott Robertson at 8:38 pm 1 comment: 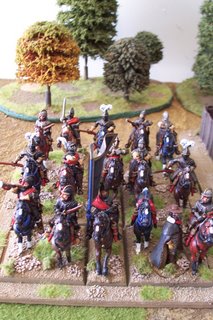 A unit of 15 mercenary Cuirassiers that I use with my Swedish army, of course I feel that they would be more at home in a Austrian or Brandenburg force. I am not that sure if Sweden employed units that were so heavily armoured during 1655-60 but as a huge fan of the books of Henryk Sienkiewicz and especialy 'The Deluge', I feel they belong in my Swedish army (have yet to play a game with this army). There are 9 Redoubt Miniatures and 6 Essex Miniatures figures in this unit and they mix really well (mounted on Elite Miniature horses of course). I really like Redoubt Miniatures because of the many varients (seperate legs and body) and heads. Redoubt heads are great but about 25% of them I do not like and seem too small but the excellent husband and wife team from Eastbourne always send twice as many heads that I need (I do recommend looking at their extensive site). The dismounted figure is an armoured bishop from the Redoubt 3 Musketeers range and can be replaced with others depending on the figures bought in your army (photos later).
Posted by Scott Robertson at 8:16 pm No comments: 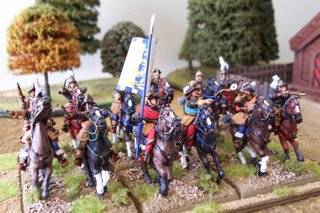 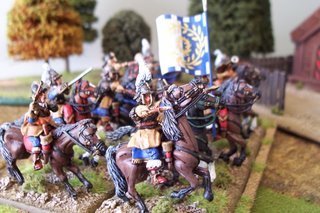 More Swedish cavalry from Redoubt.
Posted by Scott Robertson at 6:24 pm No comments: 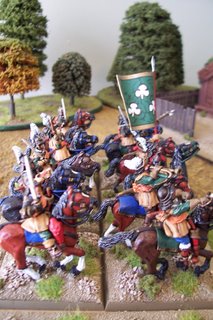 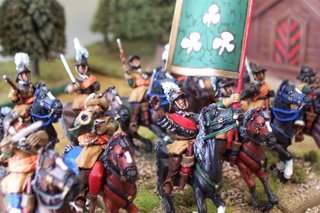 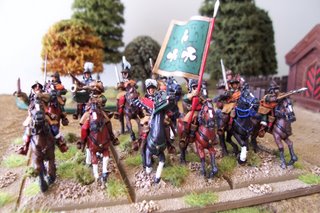 These are Redoubt Miniatures riders on Elite Miniatures horses. I have used green stuff to make the saddlecloth and saddle whilst the pistol holsters are sold in packs of 10 by Redoubt. The Swedish cavalry regiments of Karl X's army left most of their body armour and helmets in depots before entering Poland in 1655. Once again I have used flags from the TYW period and I will update these early in 2007 when I return from my trip to Norway and Sweden with better information (loads of Swedish books to buy).
Posted by Scott Robertson at 5:21 pm No comments: 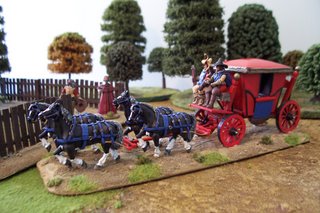 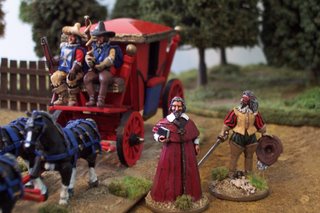 Finally took some photos of the Redoubt coach today. I have yet to add the reins to the horses and driver. I have cut these and will paint them in the next few days, I have used foil from an old toothpaste tube I bought in Morocco in 2000 (amazing how long it actually lasts). It was the first holiday with my girlfriend and she thought I was a bit strange then (she is sure of that now but she is still here). I have always stuck to the great advice given in the Military Modelling magazine which stated that if you saw something you could use the make something special grab it.
Posted by Scott Robertson at 4:54 pm No comments: